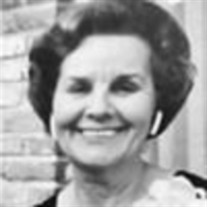 Meredith Winship Morrison, passed away December 5, 2021, at her home in Yuba City, CA. Within days of her birth to Edwin and Marie Winship, on July 9, 1921, she was given the nickname "Mitzi" and was called by that name for the next 100 years. She... View Obituary & Service Information

The family of Meredith Windship Morrison created this Life Tributes page to make it easy to share your memories.

Send flowers to the Morrison family.