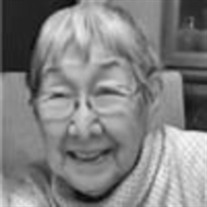 Nancy Nakatani passed away peacefully at her home surrounded by family on Monday, April 13, 2020. Nancy (Toshiko) Nakatani was born on May 10, 1928, in West Palm Beach, Florida. Her father Jusaku, an importer of Japanese goods, immigrated to the US in the early 1900's, and obtained a permanent resident visa upon his arrival. Nancy's mother Matsu, on the other hand, arrived in the US in the early 1920's and was not granted the same visa. Due to the Immigration Act of 1924, Matsu was deported back to Japan, taking Nancy and Nancy's sister, Emiko, with her. Nancy was raised in Osaka, Japan. In 1944, Nancy's high school was drafted to work in the local factories, where she spent most of her junior year supporting the war effort for the Imperial Army. In April 1945, Nancy's high school and factory were destroyed by Allied bombs. With nowhere to go, Nancy landed a job in a wholesale fish market in Osaka. However, in 1946, US Army officials tracked her down, knowing she was an American citizen, and drafted her into the US Army Intelligence as a mail screener. She worked for the Civil Censorship Department (CCD) from 1946 to 1948. In early 1948, she returned to the US, eventually settling in San Francisco where she attended school and worked as a domestic in a private home. She met Yutaka Nakatani in 1950, while attending a dance in San Francisco. They were married in Las Vegas in December 1952. Nancy and Yutaka eventually settled in Yuba City, CA, where they raised their four children, and owned and operated Butte View Farms for 40 years with Yutaka's two brothers. After retiring from the farm in 1986, they enjoyed traveling with friends, and spending time with their children and seven granddaughters. Nancy was an accomplished seamstress, often designing her own patterns, and sewing not only clothes for herself, but clothes for her children and grandchildren. She would spend countless hours reading, getting lost in her favorite books. She also loved to garden and was known around the neighborhood for her tomatoes, Japanese cucumbers, eggplants and mandarin oranges. Nancy also enjoyed spending time with her friends, who gathered once a month at the Buddhist Church in Marysville, to craft handmade greeting cards. Nancy is survived by her sons, Glenn (Guissella) Nakatani and Ray (Tanya) Nakatani; and her daughters, Sue (Rick) Tortorello and Linda (David) Mathews. She is also survived by her grandchildren, Heather (Eliot) Harrison, Rebecca (Dante) Digiustino, Mitzi Mathews (Calvin Caviness), Amanda Mathews, Rachel Nakatani, Brianna Nakatani, and Lili Quevedo; and two great-grandchildren, Hunter Harrison and Ren Nakatani. She is preceded in death by her husband of 61 years, Yutaka Nakatani; her parents, Jusaka and Matsu Fujioka; and sister, Emiko. Nancy was known and loved by many for her generosity and loving personality and will be greatly missed by all. Private services will be held at a later date. In lieu of flowers, donations can be made to Sutter Health/Care at home (HOSPICE) or a charity of your choice.

Nancy Nakatani passed away peacefully at her home surrounded by family on Monday, April 13, 2020. Nancy (Toshiko) Nakatani was born on May 10, 1928, in West Palm Beach, Florida. Her father Jusaku, an importer of Japanese goods, immigrated to... View Obituary & Service Information

The family of Nancy Nakatani created this Life Tributes page to make it easy to share your memories.

Nancy Nakatani passed away peacefully at her home surrounded...

Send flowers to the Nakatani family.