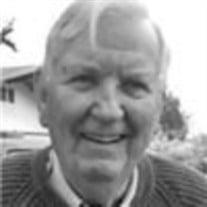 Norman Frank Piner passed away gently and peacefully in the arms and presence of his beloved family on the afternoon of October 28, 2021. Born "almost a firecracker" on July 1, 1927, to Frank Anthony Piner and Rowena Windeler Piner, he and his younger brother, Bruce, grew up in Calistoga. Norm loved telling stories of his childhood, from memories of pets to tales of hunting, fishing, playing basketball, baseball or trumpet. He and his brother attended their father's alma mater, St. Mary's College, in Moraga. Although his time there was interrupted by a two-year stint in the Navy, he graduated in 1951, with a business degree. Those Navy years became another trove for his storytelling, from San Diego basic training to his eventual rank as Storekeeper 3rd class in Astoria, Oregon. He never went to sea nor saw live action but was proud to play taps on his horn for fellow sailors who paid the ultimate price. In the fall of 1951, Norm married Loadel Harter, a Mills College graduate, he had met on a blind date three years earlier. After stints at Standard Oil and National Container, he joined Harter Packing Company. He stayed there until his retirement from his position as Vice President and Sales Manager of what had become CHB Foods. Norm and Loadel raised their three children around orchards, irrigation ditches and miles of smooth concrete at the cannery, perfect for rollerskating. Loadel; Kelleen Piner (Robert Blanco), Matthew Piner (Margaret Piner), Steven Piner (Deidra), seven adored grandchildren, plus one grandson-in-law, survive him. Brian Evan and Graham Blanco, Rachael O'Brien (Tyler Blackney), Johnathan Piner and Lauren and Hayden Piner, brought immense joy to him every time their paths crossed. A Presbyterian, Mason and honored by Rotary as a Paul Harris fellow, he was committed to his community and enjoyed a large circle of friends. He was a golfer, tennis player and avid sports fan. Norm was generous to a fault and would literally give the shirt off his back or the shoes from his feet. He was also a lifelong lover of all kinds of jazz, especially horn. In his later years, when he and Loadel moved to Davis to be closer to family, he was never happier than when he had a cat on his lap, an Oreo in his hand and a grandchild listening to his wonderful stories. The family wishes to thank Ramon and the staff at Bridgeway Care Home for their exemplary care of Norman in his final weeks. Services will be held at 1 p.m., November 17, 2021, at St. Andrew Presbyterian Church in Yuba City. Memorial remembrances can be directed to the St. Andrew Legacy Fund, the Sutter County Museum or the charity of your choice.

Norman Frank Piner passed away gently and peacefully in the arms and presence of his beloved family on the afternoon of October 28, 2021. Born "almost a firecracker" on July 1, 1927, to Frank Anthony Piner and Rowena Windeler Piner, he and his... View Obituary & Service Information

The family of Norman Frank Piner created this Life Tributes page to make it easy to share your memories.

Norman Frank Piner passed away gently and peacefully in the arms...

Send flowers to the Piner family.