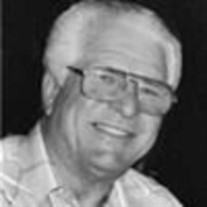 Blaine took his final ride, this time to Heaven on December 25, 2021, after a long illness. Blaine was born December 3, 1933, in Boulder City, Nevada, to parents Otto and Emma Henrikson. He was raised in Reno, Nevada. Blaine was a bright, athletic student. In high school he excelled in basketball, track and football. He loved sports and later in life participated in every kind including the above plus hunting, fishing, shooting and later his horse back riding. He loved his horses. He loved to trail ride, complete search and rescue, camp out with others to ride trails, and to go out of state hunting, riding, and packing. At age 22 Blaine began his career in the telecommunications business climbing poles and stringing telephone wire for Western Electric. After a few more positions and promotions, during which time he also served 6 years in the Navel Reserves, he moved to Yuba City to be the Manager of the Pacific Telephone Co. business office in Marysville. From there he went on to other management positions working in Sacramento and San Francisco. In 1984, he married wife Shirley and they moved to the Bay Area where Blaine worked for Pacific Telephone and Shirley worked for AT&T. After 30 years Blaine retired. He commuted between the Bay Area and the Oregon House/Brownsville area where he worked on his rentals and started his two new foals. Blaine and Shirley had gotten their real estate licenses during this time. So, after a 30 year career with Pacific telephone, he started his new career as a Realtor. He worked at Hoxworth Real Estate in Browns Valley, then went on to work at Sunwest Real Estate in Browns Valley before retiring. Blaine was always active and involved. He served as President of the Chamber of Commerce and was involved in the merging of the Two county chambers into one. He was in Rotary, served as President of Foothill Lions Club, Captain of the Yuba County Mounted Posse, President of the Golden Feather Riders Club and twice Big Sir of the Sons in Retirement Chapter 109. He loved his Browns Valley mini ranch where he raised cattle and kept his horses. You would find him on a shovel changing irrigation water, building and mending fences or feeding livestock. He put in a big pond where many of his grandchildren first learned to fish, had the pony for them to ride, a place to wild turkey hunt and an irrigation ditch for them to tube down. His children, grandchildren, great-grandchildren, extended family and friends all love to come to "the ranch" to be with Dad and Papa. Family meant everything to Blaine. Blaine loved to hunt, fish and take vacations with family and friends. Fishing in Kodiak Alaska, the Pacific Ocean, The Great Lakes and locally with his Sirs buddies, hunting in Montana and Colorado and vacationing in timeshares. He also like to cruise Alaska and vacation with great friends sharing timeshares and trailer trips. Blaine is preceded in death by his father, Otto Henrikson; mother, Emma Henrikson; sister, Bernice Jatros; and brother, Keith Henrikson. He is survived by wife, Shirley of Yuba City; brother, Phillip Henrikson of Venice, CA; Sons Ronald (Carolyn) and Gene (Jo) of Reno, sons, Mark (Sandra) of Vacaville, and Eric (Andrea) of Yuba City; stepson, John Littlejohn (Nedra) of Sutter; and stepdaughter, April Porter (Russell) of Afton, Wyoming. He is survived by 8 grandchildren, 8 great-grandchildren, and many nieces, nephews and great-nieces and nephews. Blaine will be missed greatly by all. There will be a private burial service. A Memorial Service will be held at Ullrey Memorial Chapel at 11:30 on Saturday, January 8, 2022.

Blaine took his final ride, this time to Heaven on December 25, 2021, after a long illness. Blaine was born December 3, 1933, in Boulder City, Nevada, to parents Otto and Emma Henrikson. He was raised in Reno, Nevada. Blaine was a bright, athletic... View Obituary & Service Information

The family of Otto Blaine Henrikson created this Life Tributes page to make it easy to share your memories.

Blaine took his final ride, this time to Heaven on December 25,...

Send flowers to the Henrikson family.