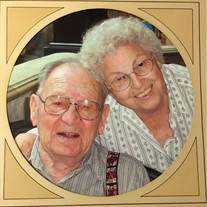 Pauline Ruth Kingery 7/02/1920---12/27/2019 Pauline Ruth Kingery passed away on December 27, 2019. She did not make it to 100 years but did her best at 99 years 6 months. She survived her husband Roy Madison Kingery who passed away on January 17, 2010 at 96 years 11 months. They were married for 72 years. Pauline was the home keeper, business manager, mother, grand mother, great grandmother, and great great grandmother, a very fine water color painter and an excellent Trout fisher woman. She was a high school graduate with some college studies that helped her manage for the family. She was the youngest of seven children whose parents migrated out of the Texas/Oklahoma country during the Dust Bowl and Depression years into California. She was very devoted to her sisters and brother who have all passed away. Lottie Alexander, Mildred Kennedy, Ralph Owen, Ruby Greenwood, Donna McKnight, and Lona Clark, all resided and passed away in California. Roy and Pauline were married in November 13, 1938 in Reno, Nevada. Roy signed up for the Seabees of the Naval Construction Battalions in 1945 but World War II ended before he could serve. In the 72 years of marriage Pauline and Roy lived in many parts of the World. Roy started working in the construction industry as teamster, equipment operator, grade foreman, superintendent through out the Western United States. He was a 30 year member of Local #3 Operating Engineers Union. In 1951 he took his family to Afghanistan on a Dam and Canal Project for a 2 year contract for Morrison-Knudsen International Co. English speaking schools were not available in Afghanistan so Pauline placed Randie and Dennis into private schools in Quetta, Pakistan. Roy joined the Grand Bolan Lodge of Ancient Free and Accepted Masons of Scotland on September 20, 1954 in Quetta, Pakistan. Bolan is one of the oldest Masonic Lodges in the World. Roy then took his family to Iran in 1954-1959 for a 4 years contract on a Dam project. Again English schools were not available near the work site so the children were boarded out with American families so they could go to English speaking schools in Tehran, Iran. In 1959 Roy took a contract for 2 years to build a Dam on the Island of Taiwan (Formosa). After their return from overseas, he continued to work in Northern California until he retired in 1969 to a small farm near his birth place of Star, Idaho. Then back to Yuba City, CA in the 1980's And again their last move out to Wickenburg, AZ to be near their daughter's family in 2005. Pauline is survived by her daughter Randie Ashley of Wickenburg, AZ. and son Dennis Kingery of Las Vegas, NV and many grandchildren, great grandchildren and great great grandchildren. She lived in her own home, at her insistence, since Roy's passing supported daily in Wickenburg, AZ by daughter Randie Ashley and her niece Geri Martin (Ruby Greenwood's daughter), great grand daughter Amanda Ashley and good friend Susie Vogtlander. Although her body was failing her in the last months, she was blessed to have all of her memories and mental capacities to the last days. Always quick and still able to keep any family member in line. As were her wishes, the family will have a private burial in the Family Cemetery in Sutter, California at the base “of the biggest little mountain range in the world”- Sutter Buttes. She posted this life guidance poem on her refrigerator, many years ago, by French-born American Quaker missionary, Stephen Grellet (1773-1855). I shall pass through this world but once. Any good therefore that I can do or any kindness that I can show to any human being, let me do it now. Let me not defer or neglect it for I shall not pass this way again. Private Services were held. Please do not send flowers.

The family of Pauline Ruth Kingery created this Life Tributes page to make it easy to share your memories.

Send flowers to the Kingery family.