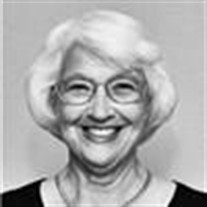 Paulla Janette McIntire, 84, a visionary educator, intrepid world traveler, and connoisseur of vanilla milkshakes, died February 14, 2020, at home in Yuba City. Born in 1935, in Kansas City, Missouri, to Clifford and Rubye Roberds, she grew up in Independence, Missouri; San Francisco, California; and Orland, California. She graduated in 1958, from Chico State College with a Bachelor of Arts degree and teaching credentials. She moved to Yuba City that year for her first job, teaching at Gray Avenue Middle School. During her 37-year career, she also taught at King Avenue and Park Avenue elementary schools in Yuba City, was an administrator at Yuba City Unified School District and a principal at Live Oak Middle School. She was known for developing innovative solutions to overcome socioeconomic barriers to education. She loved working with all children, but was especially drawn to those from underprivileged backgrounds. Her husband, John, says "she always loved working with children at risk of being left behind." In the early 1970's, in response to a need to broaden the horizons of disadvantaged students, Paulla created a unique summer program designed to give children experiences they otherwise might never have had. Inspired by summers spent traveling around the country with her own children – in an old bread truck converted into an early motorhome – she developed a novel approach to integrate learning with travel. Called the Magic Carpet School, the program consisted of two school buses loaded with students, teachers and staff, who hit the road every day with a real-world curriculum. Students learned to camp in the redwoods, explore the seashore, ride elevators in city skyscrapers, read maps and calculate gas mileage. As principal at Live Oak Middle School, she developed and implemented programs that raised the educational achievement of all students, earning designation as a California Distinguished School. In 1989, U.S. President George H. W. Bush presented Paulla with a Drug-Free Schools Award for an education program that influenced not only the middle school but the entire community of Live Oak. At the award ceremony in the White House Rose Garden, President Bush called her "the visionary dynamo behind the progress" and said she succeeded through "vision, no-nonsense leadership, compassion, and professional expertise." As an administrator, Paulla fostered success among teachers and empowered them to implement innovations of their own. She advocated for the needs of teachers, fighting for budgets and grant funding to support teacher training and buy equipment. She was featured in the May-June 1994 issue of "Technology Learning Magazine" as a national leader in integrating technology in the classroom. The feature story said "Paulla McIntire's gentle determination is an inspiration to all who know her." After retiring in 1995, Paulla and her husband, John, embarked on 25 years of world travel, often cajoling friends and family to go along, and introducing grandchildren to new places and experiences. From Asia to South America, and from Russia to the Middle East and Europe, she delighted in the cultures, history, food and art of people around the globe. She took particular pleasure in sharing these adventures with others, booking trips for friends who had never traveled or showing family members how to navigate unfamiliar countries. Always the educator, she studied in advance the sights she would visit and then shared information along the way with travel companions and – via a daily email journal – with loved ones back home. Paulla was at her happiest spending time with family and friends. She loved hosting Super Bowl parties for her church group and block parties for the neighborhood. She enjoyed season tickets to Sacramento and San Francisco theatres, which she attended with her husband and close friends. Paulla was an avid genealogist, researching not only her own ancestry, but that of all the in-laws as well, sharing stories with grandchildren about their heritage. She was a voracious reader and an indefatigable shopper. She filled her home with pink roses, books, and Polish pottery. Her children remember her lovingly as a person who was "all in" on everything she did. Paulla is survived by her husband of 44 years, John Howard McIntire; and by her younger sister, Merry Elaine Hoggard (Mitch); her six children, Bonnie Hyatt (Pete Miller), Jay Hyatt (LuAnn), Mary Betus (Bill), Paulla Hyatt-McIntire (Brad McIntire), Paul Hyatt (Karla), and John Hyatt (Kiley); and by four stepchildren, Mike McIntire (Kate), Mark McIntire, Lisa McIntire, and Lori Simpson (Larry); 25 grandchildren; 13 great-grandchildren; and numerous nieces, nephews, and other family. She is preceded in death by her parents; her younger brother, David Roberds; her stepson Chuck McIntire; and her grandchild Corey Farrish. A celebration-of-life service will be held Monday, March 2, 2020, at 1 p.m. at St. Andrew Presbyterian Church, 1390 Franklin Road, Yuba City.

The family of Paulla Janette McIntire created this Life Tributes page to make it easy to share your memories.

Send flowers to the McIntire family.