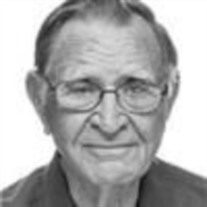 Preston Dale Bradley, 92, passed away at home in Browns Valley, CA, on April 7, 2020, after a long bout with Alzheimer's. Preston was born on July 25, 1927 in Modesto, CA, one of seven children. After graduating from Modesto HS in 1945, he joined the Army and served in the Air Corp/Air Force from 1945-1948. He served as an Air traffic Controller in occupied Japan from 1946-1947. After his discharge he worked as a lineman for the phone company until he entered Northwest Christian College in Eugene, OR, where he met his wife of 67 years, Joyce Taylor. They were married on June 17, 1951. After he received his BA from NCC, Preston attended seminary at the Pacific School of Religion in Berkeley, CA, where he received a Masters degree. He was ordained in the Christian Churches of Northern California and Nevada and served as the minister of the First Christian Churches of Manteca, Colusa, and Willows before his retirement from the Ministry in 1967. He then served, first as an Employment Counselor, and then as a Vocational Rehabilitation Counselor, for the State of California until his retirement in 1990. After his retirement from the state he served part time for seven years as a counselor for Pathways in Yuba City. Preston loved fishing, hunting, camping, and most of all, landscaping, gardening, and working on the property he and Joyce owned in Browns Valley, CA, where he designed and built the house they lived in for 54 years. Preston and Joyce raised four children, Mark, Connie, Vicki, and Paul, and they loved spending time with their 11 grandchildren and 24 great-grandchildren. They were active members of St. Andrew Presbyterian Church in Yuba City, and both served as Elders. Preston is preceded in death by his parents, Ruth and Percy Bradley; his sisters, Margaret Wilkinson, Esther Krachek, and Carol Hill; and his brother, Stanley "Buck" Bradley. He is survived by his wife, Joyce;, two sisters, Marilyn Valentine of Kansas, and Eileen Strom of Tracy, CA; his children, Mark of Browns Valley, CA, Connie Moody (Dave) of Sacramento CA, Vicki Drummond of Florida, and Paul (Tanya) of Atascadero, CA. Preston was dearly loved by everyone who knew him and will be sorely missed. A Celebration of Life will be held at a later date.

Preston Dale Bradley, 92, passed away at home in Browns Valley, CA, on April 7, 2020, after a long bout with Alzheimer's. Preston was born on July 25, 1927 in Modesto, CA, one of seven children. After graduating from Modesto HS in 1945, he joined... View Obituary & Service Information

The family of Preston Dale Bradley created this Life Tributes page to make it easy to share your memories.

Preston Dale Bradley, 92, passed away at home in Browns Valley,...

Send flowers to the Bradley family.