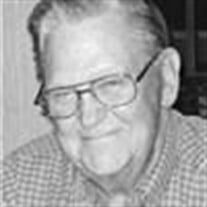 Rallin Ahlers, 80, of Sutter, left this earth to join our Heavenly Father on December 27, 2019. He was born November 16, 1939 to parents Emil and Laura (Hilbers) Ahlers. Though born in Chandler, Arizona, Rallin considered himself a life-long Sutter resident, where he was deeply devoted to his family, his church and his beloved Sutter community. Rallin made his homestead at the base of the beautiful Sutter Buttes and raised his family there, just beneath the old Sutter Cross upon the hill. Rallin was always quick with a joke and generous with his smile. Once you met him, he was your friend. You didn't have a choice; he just was. He worked for the Sutter County Department of Agriculture's Division of Weights and Measures for over 40 years before retiring. Over his lifetime, he worked to better the Sutter community in a variety of ways, among which included establishing, along with his wife, Gail, the Sutter Buttes chapter of the 4-H Club in the mid-1960's. Rallin also served as a respected Sutter High School Board Member continuously since 1978. He was one of the unsung, behind-the-scenes policymakers that helped Sutter High School become the school of choice for many in the area. He also helped establish the school's Booster Club many years ago. Rallin himself was a Sutter High alumnus, and it made him immensely proud that his children, and grandchildren, attended the school as well. At every Friday night home football game for the past 40 years, you could find Rallin on the sidelines working on the Chain Gang, measuring yardage and tracking downs. He and the other Chain Gang volunteers were greatly appreciated and widely respected. Rallin was humbly honored to fulfill these roles within the Sutter Community and his passing is a loss to us all. He was a true Sutter Husky. Rallin is survived by his loving wife of over 56 years, Gail Ahlers, and their daughter Karlyn (Darrell) Hubbart of Sutter, son Brian (Kristi) Ahlers of Illinois, son Darin (Christina) Ahlers of Sutter, and seven adoring grandchildren: Jason, Jessica and Jared Hubbart; Nikolas and Zachery Ahlers; and Emily and Ryan Ahlers. He is also survived by his sister Joan Hancock, brother Wayne (Annette) Ahlers, brother Loren (Eve) Ahlers and sister Nadine (Jim) Haynes. Rallin was preceded in death by his parents and older brother, Dale Ahlers. A celebration of life will be held Saturday, January 25, 2020 at 11:00am at Sutter Methodist Church in Sutter (corner Acacia Ave & South Butte Rd) followed by a potluck at the church. Inurnment at the Sutter Cemetery will be private under the direction of Ullrey Memorial Chapel.

Rallin Ahlers, 80, of Sutter, left this earth to join our Heavenly Father on December 27, 2019. He was born November 16, 1939 to parents Emil and Laura (Hilbers) Ahlers. Though born in Chandler, Arizona, Rallin considered himself a life-long... View Obituary & Service Information

The family of Rallin Ahlers created this Life Tributes page to make it easy to share your memories.

Rallin Ahlers, 80, of Sutter, left this earth to join our Heavenly...

Send flowers to the Ahlers family.