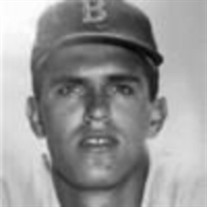 Raymond George Webster, known to friends as "Ray", passed away peacefully on June 3, 2020, with his loving wife of 60 years, Anne, and faithful dog Shadow by his side. Ray was born in Grass Valley, CA, on November 15, 1937, to Norma and Bill Webster. Weighing in at 3 lbs., 2 oz., he spent two months in an incubator. As soon as he was big enough to walk and swing a stick, he batted rocks and threw balls in the air, the early beginnings of a successful baseball career. After playing in the sandlot at Loma Rica Grammar School, Ray went on to play shortstop at Marysville High School. Later, he played for minor league teams, the Yuba-Sutter Rebels and Salem (Oregon) Senators, before logging 102 games with the Sacramento Solons in the Pacific Coast League (AAA). He made his first major league appearance on April 17, 1959, as a pinch hitter for the Cleveland Indians. He played 40 major league games in 1959 with the Indians before serving in the United States Army. Upon returning from the Army, Ray was traded to the Boston Red Sox and made his first appearance for the team in April in Washington D.C. Ray retired from baseball after a second stint in the U.S. Army and became an insurance agent, an apt occupation for a man who never met a stranger. Ray was a character who liked to laugh and tease. He gave most of his friends nicknames and called his wife Anne, "George" their entire marriage. He was full of heart, outgoing loved to golf, hunt and fish. He moved to Browns Valley in 1982 for the peace and quiet. He never got tired of watching the many critters that would appear in the yard. Ray is survived by his wife, Anne; sister, Nadine; nephews, Randy (Charisse) Webster, and Rolf Jahn; and great-nephew, Tyler Webster. No services are planned at this time.

Raymond George Webster, known to friends as "Ray", passed away peacefully on June 3, 2020, with his loving wife of 60 years, Anne, and faithful dog Shadow by his side. Ray was born in Grass Valley, CA, on November 15, 1937, to Norma and Bill... View Obituary & Service Information

The family of Raymond George Webster created this Life Tributes page to make it easy to share your memories.

Raymond George Webster, known to friends as &quot;Ray&quot;, passed away...

Send flowers to the Webster family.