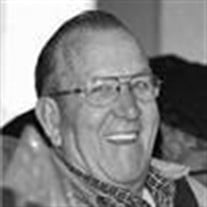 Richard B. Applegarth, 83, of Yuba City, passed into the arms of Jesus on May 9, 2019. He was born on March 14, 1936, to Thomas and Opal (Long) Applegarth in Warner, OK. He moved with his parents to Yuba City at the age of three months, making him a lifelong resident. He was the oldest of six siblings and was known as "Brother" to them. He attended Yuba City schools and graduated in 1954 from Yuba City High School. He met the love of his life, Janice Langley, and they were married on June 7, 1957. They welcomed their only child, Donald, in October of 1965. He was the pride and joy of their lives. Don added a daughter to the family when he married his wife, Cindy, in 1990. They added three grandsons that Richard loved with his whole heart. Richard served in the United States Army and retired as a manger from the supermarket industry. Later he and Janice owned and operated Franklin Furniture in the 1970's and '80s. After retirement, they travelled across the country many times in their RV. They enjoyed visiting family and friends and seeing many new places. In younger years he was an avid hunter and fisherman and loved camping with his family and friends. Richard was an accomplished musician. He played lead guitar, but one of his gifts from God was being a master steel guitar player. He entertained many for over 65 years. As his niece stated, "he now knows how a steel guitar echoes on the streets of gold". Richard leaves behind a legacy of honor and hard work. He was a man of integrity who loved his Lord and served him faithfully. He was a friend to many and always willing to help those in need. Our lives are forever changed as there is now a missing link in our family. We know that he was the missing link God needed in Heaven. Thank you Jesus for sharing him with us for 83 years. We will miss you dearly and will rejoice when we meet again. Richard is survived by his wife of 62 years, Janice; his son, Don and daughter-in-law, Cindy; three grandsons: Ross, Colton, and Cameron; sisters, Lenora "Sissy" Elliott, Joan (Dick) Diggs, Janet (James) Yarbrough; and brother, Tommy (Nancy) Applegarth; and many nieces and nephews. He is preceded in death by his parents, Tom and Opal Applegarth; his baby brother, Thomas Deon Applegarth; and brother-in-law, Jim Elliott. There will be a viewing Wednesday, May 15, 2019, 4:00 - 7:00 pm at Ullrey Memorial Chapel, 817 Almond Street, Yuba City. Services will be held Thursday, May 16, 2019, at 11:00 am at Hope Point Nazarene Church, 600 N. George Washington Blvd., Yuba City. Burial will follow at Sutter Cemetery with a reception back at Hope Point Nazarene Church. ArrangementS are under the direction of Ullrey Memorial Chapel.

Richard B. Applegarth, 83, of Yuba City, passed into the arms of Jesus on May 9, 2019. He was born on March 14, 1936, to Thomas and Opal (Long) Applegarth in Warner, OK. He moved with his parents to Yuba City at the age of three months, making... View Obituary & Service Information

The family of Richard B. Applegarth created this Life Tributes page to make it easy to share your memories.

Richard B. Applegarth, 83, of Yuba City, passed into the arms...

Send flowers to the Applegarth family.