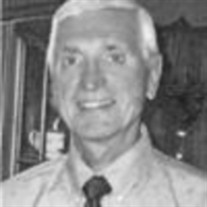 Richard Steve Vyka, of Yuba City, California, was born on December 18, 1933, to Frank and Katherine Vyka, in Pittsburgh, Pennsylvania. He passed away on his birthday, December 28, 2020, from COPD and other complications, at his home. He was in the USAF for 22 years, retiring as MSgt. in 1975. He then worked at the Post Office in Yuba City for 19 years. While stationed in England in 1955, at Sculthorpe AFB in Norfolk, he met the love of his life, Janet, at a dance - it was love at first sight! They married and lived in the seaside town of Cromer, where he started playing golf on the course overlooking the sea. That was the beginning of 51 years of playing all over the United States and wherever he was TDY, winning a lot of tournaments. He was in Vietnam for a year, mostly at Nha Trang Air Base. His last assignment was Beale AFB, where he was awarded the "Bronze Star Medal." He had three great sons, Mark (Dawn), worked at the Yuba City Post Office for 35 years and sadly passed away in 2016, of cancer. The people on his route always remarked on "What a nice young man he was, respectful and courteous to people he met." He and Dawn had two daughters, Tasha and Adrienne, four grandchildren, Sean Ryan, Tiana, Harley and Austin. Greg was born in the town of Indiana, PA, enlisting in the USAF in 1983. He was playing golf as a toddler with his dad while at MacDill AFB in Tampa, Florida. Over the years, he got to be an "ACE" golfer, winning tournaments at Mildenhall AFB in England, Spain, Italy, Griffith AFB in upstate NY, Vandenberg AFB, CA, Andrews AFB in Maryland, and Beale AFB in Marysville, CA. He was well liked by everybody he met, but sadly passed away of a heart attack in 2012. Nick was born at MacDill AFB in Florida, and was always interested in planes that flew in Combat during different wars over many years. He graduated from Wheatland High School, as did his brothers, Mark and Greg, and worked for different companies. He was the comedian of the family making people laugh and helping his mom and dad with their many health problems in later years. Richard was the best husband and dad, always patient and kind and willing to aid others who needed a helping hand! He will be missed greatly by family and friends alike - a great person. He leaves behind his loving wife, Janet, son Nick, Dawn, dear wife of Mark (deceased), Sean (Greg's son), now serving in the National Guard, Ryan (Greg's son), now serving in the USAF, loving brother, Frank (Aldine) of Ohio, lovely sister, Janet (Andy) of Ohio, Uncle Sam (Nancy) of Pennsylvania, Uncle Bob (Fran) of Coal Run, Pennsylvania, and dear sister-in-law, Ann (Peter) of Norwich, England. Cremation arrangements kindly handled by the Ullrey Funeral Home.

Richard Steve Vyka, of Yuba City, California, was born on December 18, 1933, to Frank and Katherine Vyka, in Pittsburgh, Pennsylvania. He passed away on his birthday, December 28, 2020, from COPD and other complications, at his home. He was... View Obituary & Service Information

The family of Richard Steve Vyka created this Life Tributes page to make it easy to share your memories.

Send flowers to the Vyka family.