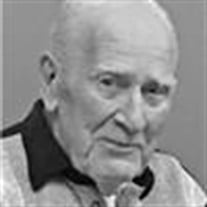 Robert James Glass, aka "Bob", age 91, passed away on Sunday, May 12, 2019. He was born on December 4, 1927 in Crosby, MN. He joined the U.S. Merchant Marines at age 16 during WWII and fought in the Pacific Theater serving on ships James H. Lane and SS Bowdoin Victory. After the war, Bob joined the U.S. Air Force and served for 22 years. His active duty took him to Offutt AFB, Morocco, Zaragoza Spain, Larson AFB, Malmstrom AFB, and Goose Bay Labrador. Bob retired as MSgt. from Beale AFB. After his service, Bob worked for Spreckels Sugar in Woodland then Yuba College where he also obtained a degree in Business Administration. He was a resident of Yuba Sutter since 1972. He was a member of the Yuba City American Legion Post 705 and Yuba City Moose Lodge. He is survived by three sons: Robert, his wife Loretta, their two sons, Wesley and Matthew; Ricahrd, his partner Stephanie; and Bruce, his wife Ellen, their three children, Shaun, Bryan, and Lauryl, her husband Brian and a great-granddaughter Chloey. He is also survived by several nieces and nephews. Bob is preceded in death by his wife, Jean Ruth, a sister and three brothers from Washington, Cathryne, Ronald, Donald and Bill. During these last few years, Bob enjoyed being with family and friends, going to the casinos, Moose Lodge, working out at the gym, and especially Friday morning breakfast with friends at El Zarape. A sincere Thank You to Sutter North Hospice for their unconditional support and especially Bob's caretakers, Jennifer and Mary. In lieu of flowers, the family would appreciate donations being made to Sutter North Hospice. Memorial services will be held on Friday, May 31, 2019 at 2:00 p.m. with Military Honors at Ullrey Memorial Chapel, Yuba City. Interment will be at Sacramento Valley National Cemetery in Dixon. Arrangements were provided by Ullrey Memorial Chapel.

Robert James Glass, aka "Bob", age 91, passed away on Sunday, May 12, 2019. He was born on December 4, 1927 in Crosby, MN. He joined the U.S. Merchant Marines at age 16 during WWII and fought in the Pacific Theater serving on ships James H.... View Obituary & Service Information

The family of Robert (Bob) James Glass created this Life Tributes page to make it easy to share your memories.

Send flowers to the Glass family.