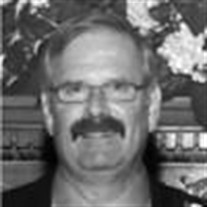 Bob, age 65, Yuba City, passed away peacefully with family at his side on August 7, 2019, at Rideout Hospital, in Marysville. Born in Oakland on January 6, 1954, and raised in Piedmont, CA, he graduated from Menlo College, where he played goalie for the 1972 Soccer State Champion Oaks with mentor and coach Senior Lopez. Bob then transferred to UC Santa Barbara where he met his loving wife of 39 years, Karen Suta, and was a member of Sigma Chi fraternity. Bob was VP-Plant Manager of Avalon Bay Foods, Yuba City, and later a Correctional Officer with Leo Chesney and Sutter County. Bob loved traveling and coaching his daughters' soccer teams from youth through college. He enjoyed family times at the Suta cabin in Tahoe, his SF Niners, long ball golf and his labs, Scooby and Copper. Bob continued the 4th of July Blowout party legacy of the Henderson Clan. Recently, Bob welcomed his first granddaughter who brought him great joy. Bob was predeceased by his parents, Anne Pacewicz and C. Richard Henderson, of Piedmont; and his Auntie Marion Elrod, of Alameda, who helped him land a sand shark in her bayside lagoon. Bob is survived by his wife, Karen; daughters, Stephanie Welsh (Luke), of Yuba City and Kristin Henderson, of Oregon and infant granddaughter, Lucille Welsh; brother, Thomas Henderson, of Oakland; and sister, Linda Read, of Altadena. Bob would want to thank his family, neighbors, and staff of Rideout and CA Pacific Medical Center for all their support during his illness. A memorial service will be held on Friday, August 16, 2019, at Noon, at Ullrey Memorial Chapel, 817 Almond St, Yuba City, CA. Later, Bob will be interred at Happy Homestead, in So. Lake Tahoe, per his wishes. In lieu of flowers, donations may be made to St. Isidore School Athletic Programs, 222 Clark Ave. Yuba City, CA 95991.

Bob, age 65, Yuba City, passed away peacefully with family at his side on August 7, 2019, at Rideout Hospital, in Marysville. Born in Oakland on January 6, 1954, and raised in Piedmont, CA, he graduated from Menlo College, where he played goalie... View Obituary & Service Information

The family of Robert "Bob" Henderson created this Life Tributes page to make it easy to share your memories.

Bob, age 65, Yuba City, passed away peacefully with family at...

Send flowers to the Henderson family.