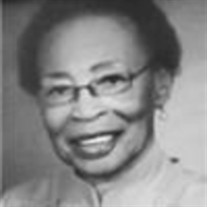 February 15, 1932 – January 22, 2021 The Lord called Ruby home on January 22, 2021. Ruby Lee was born in Alexandria, LA, February 15, 1932, to Neville and Beatrice Smith. When Ruby was a young girl, she relocated to California with her mother and stepfather, where she would remain the rest of her years. Ruby completed school in the Oroville area before making her home in Yuba City, where she married, Reuben Kingsbury, on December 18, 1948. Into this union were born three fabulous children. As God would have it, Reuben and Ruby gained another son into their union, after the passing of her sister-in-law. Ruby began her career as a Clothing Consultant, and later became a cannery worker for Del Monte Foods. Ruby moved on to Sunsweet Growers as a juice line operator, where she spent the remainder of her career, until retirement. She was a lifelong member of Bethel AME Church; a member of Teamsters Local 601 and a founder of the Merry Makers Club. Ruby loved gardening, traveling with her family and friends; fellowshipping with her Bethel A.M.E Family, and entertaining her huge extended family, friends, and loved ones at barbecues, holiday gatherings and potlucks. Ruby is preceded in death by her parents, Neville and Beatrice Smith, and her stepfather, Jessie Mims; her beloved husband of 46 years, Reuben Luther, Jr; her daughters, Marilyn and Ila; and her big sister, Myrtle Edgerly. Ruby leaves behind her legacy: her sons Eric and Rodney (Gilda); her grandchildren: Lawrence Nicks, Kali Nicks, Ira Nicks, Ilana Kingsbury, and Olivia Kingsbury; her granddaughter-in-law: Tennille Nicks; and her surviving sister, Betty Randolph. She also leaves behind 5 great-grandchildren, 12 great-great-grandchildren and a bounty of nieces, nephews, and beloved friends. Subject to Covid restrictions, funeral service will be private.

The family of Ruby Lee Kingsbury created this Life Tributes page to make it easy to share your memories.

Send flowers to the Kingsbury family.