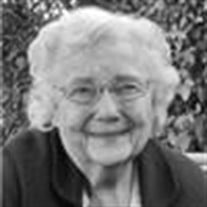 In the early hours on Saturday, August 31, 2019, Ruth Jean Proctor, at age 93, passed on peacefully from her long and full life in this world. A resident of Yuba City for over 50 years, Ruth was born, Ruth Edson, in Spokane, Washington, on June 28, 1926. Ruth graduated high school in 1944, then attended Deaconess Hospital School of Nursing, graduating in 1947 as an RN. Ruth also attended Whitworth University in Spokane, graduating with a BA Degree in 1950. One of her years of college also was spent at Willamette University in Salem, Oregon, where she studied music and met her future husband, Jack Proctor. Immediately after graduating from college, Ruth married Jack and they began an eventful life together. After a succession of moves, from Washington to Oregon to California, they wound up in Yuba City in 1968. Over the years, Ruth worked as an RN in various hospitals, until she was employed by the Marysville Unified School District in 1970, where she was a preschool nurse until her retirement in 1991. Ruth and Jack were long-time members of Yuba City First United Methodist Church, where Jack directed and Ruth sang in the chancel choir. Gifted with a beautiful soprano voice, Ruth blessed the congregation with many lovely solos. She and Jack also sang wonderful, melodic duets together. Jack passed away in 1988, but we know that he and Ruth are raising their voices together, once again, as members of the heavenly choir. Ruth always enjoyed collecting and displaying angel figurines in her home, and we are comforted in knowing that she is now with the angels in Heaven. Ruth also is predeceased by her parents, Leroy and Grace Edson; and her sisters and their husbands, Evelyn (Brad) Gunderson and Grace (Dave) Stowell. She is survived by her children: Mark (Susan) Proctor of Elk Grove; John Proctor of Yuba City; Diana (Michael) Strong of Yuba City; five grandchildren; and eight great-grandchildren. Viewing will be Monday, September 9, 2019, from 4 pm to 7 pm at Ullrey Memorial Chapel, 817 Almond Ave., Yuba City. Graveside services will be Tuesday, September 10, 2019, 11:00 am at Sutter Cemetery, 7200 Butte Ave., Sutter. A reception will follow at Yuba City First United Methodist Church, 3101 Colusa Hwy. Memorial contributions in Ruth's name may be sent to Faith Christian School or Yuba City First United Methodist Church.

In the early hours on Saturday, August 31, 2019, Ruth Jean Proctor, at age 93, passed on peacefully from her long and full life in this world. A resident of Yuba City for over 50 years, Ruth was born, Ruth Edson, in Spokane, Washington, on June... View Obituary & Service Information

The family of Ruth Jean Proctor created this Life Tributes page to make it easy to share your memories.

Send flowers to the Proctor family.