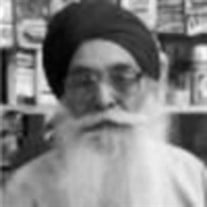 Sardar Bhag Singh Maan, passed away on August 5th, 2021. He was born in the village of Gureh in the district of Ludhiana in Punjab, India on October 29, 1926. In India, he was a farmer and also had a busing company. He raised three children with his wife. His daughter Jasminder migrated to the United States in 1974. Bhag Singh and the rest of his family joined her in the Yuba-Sutter area on August 8, 1979. This is when his American dream began. Along with his family he initially worked as a farm laborer outside of Yuba City for several months. They then moved to Los Angeles and worked in construction. They worked hard and saved up money. In May of 1982, using this money, they purchased the Neighborhood Store on South George Washington Blvd., south of Yuba City. They ran the store until 2019. Bhag Singh was a fixture at the store and was affectionately known by frequent customers as "Pops" or "Papa." He not only came to learn English but also some Spanish through his interactions. He was vehemently against handouts and by example instilled in his grandchildren hard work and earning your living. At the store he also taught them about helping the less fortunate, often giving food and water to those who could not afford it. He was also keen on teaching his grandchildren about values and about their Sikh faith, often through stories and historical examples. Through his example and teachings, all seven of his grandchildren worked hard and are successful. Family and his faith were the most important things for him. He was surrounded by family until his passing, living with his wife Balwant, son Harminder, daughter-in-law Karmjit and their children. He is survived by his wife, Balwant Maan; his daughter, Jasminder Johl; his sons, Harminder, and Harjinder Maan; niece, Jasminder Kaur; and his grandchildren, Kamaldeep Johl, Baldeep Johl, Harpreet Maan, Harjot Maan, Jasjot Maan, Sukhdeep Maan, and Pavandeep Maan. A funeral and prayer service is scheduled at 11 am on Saturday, August 14, 2021, at Ullrey Memorial Chapel in Yuba City. Bhog services and langar will follow at the Sri Guru Nanak Sikh Temple on Bogue Road in Yuba City.

Sardar Bhag Singh Maan, passed away on August 5th, 2021. He was born in the village of Gureh in the district of Ludhiana in Punjab, India on October 29, 1926. In India, he was a farmer and also had a busing company. He raised three children... View Obituary & Service Information

The family of Sardar Bhag Singh Maan created this Life Tributes page to make it easy to share your memories.

Send flowers to the Maan family.