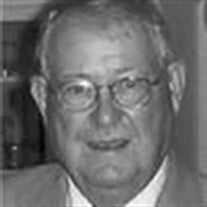 Thomas E. Frye passed away on April 4, 2019, at Rideout Hospital at the age of 93. Tom was the son of Ulysses E. and Ruth Wheeler Frye. He was born in San Luis Obispo, California and lived his entire life in Sutter County. Tom graduated from the local elementary school, Yuba City High School, and University of California at Berkeley. It was at Cal that he met Eileen Jarvis. After serving in the Army as a corporal in the Finance Corps during the Korean War, Tom and Eileen married and settled down in their home outside of Yuba City. Together, they raised three daughters; Jennifer, Cynthia, and Theresa. Tom and Eileen enjoyed travel, entertaining friends and gardening. Tom did the gardening; raising flowers, fruits and vegetables, while Eileen arranged, froze or canned everything he brought home. Tom was well known for his beautiful chrysanthemums which he gladly shared with all. Tom began farming at a young age, helping with the family walnut orchard. He farmed with his father at first, then later with his brother-in-law, Gene Lonon raising baby limas, wheat, safflower and rice. Although he retired "officially" at age 65, Tom never really quit farming. He continued, until just recently, to drive down to the ranch daily to check on things and offer his advice. Raised in a hunting family Tom continued the tradition of hunting game birds and wild game. Tom also loved fishing the brooks of his beloved Brokeoff, the inlets of Alaska and even ventured into the Pacific Ocean at times in search of the "big one". He was a great card player as well, attaining the rank of Life Master in Duplicate Bridge, which he continued playing up to the end. He was also known to enjoy an intense game of dominoes with family and friends. After Eileen's death, Tom took to travel; England, Italy and Africa were a few of his destinations. He and his friend and traveling companion, Annabel Onstott, shared many interests and adventures until her death. Tom was involved in many organizations throughout his life. He was a member Sigma Phi Epsilon, Phi Phi Honor Society and the Inter-Fraternity Council while at Cal. Locally, he was a member of the Sutter County Republican Central Committee, United Way and the Red Cross and served as president of both the Rideout Hospital Foundation and the Buttes Area Council of the BSA. Tom was on the boards of the Meridian Farm Water Co., Reclamation District 1660 and the Tisdale Irrigation and Drainage Company and was a member of the Sutter County Farm Bureau. He also belonged to the Butte Lodge Outing Club, Brokeoff Meadows Club, and the Riding Club and was a director at Peach Tree County Club. Tom was a life-long member of St. John's Episcopal Church where he served as Senior Warden and also a member of Trinity Anglican Church. Tom is survived by his daughters: Jennifer Giampaoli (David) of Sutter; Cynthia Struckmeyer of Yuba City; four grandchildren: Jared Giampaoli, Marc Giampaoli (Meghan), Lauren Cesca (Daniel), and Ryan Struckmeyer (Briana); and three great-grandchildren. Tom is preceded in death by his parents, Ulys and Ruth Frye; wife Eileen; brother Wheeler Frye; sister Janet Frye Lonon; daughter Theresa Frye; and son Timothy Jarvis Frye. Tom led a full life filled with friends and family. He will always be remembered for his love of El Zarape's chile verde, gin and tonics and for the dreaded Triple X. A private burial will be at the Sutter Cemetery in Sutter, California. A memorial service will be held at a later date. Memorials may be sent to St. John's Episcopal Church, 800 D Street, Marysville, CA 95901, Trinity Anglican Church, 929 11th Street, Marysville, CA 95901 or to Bethesda Lutheran Communities, 600 Hoffmann Drive, Watertown, WI 53094.

Thomas E. Frye passed away on April 4, 2019, at Rideout Hospital at the age of 93. Tom was the son of Ulysses E. and Ruth Wheeler Frye. He was born in San Luis Obispo, California and lived his entire life in Sutter County. Tom graduated from... View Obituary & Service Information

The family of Thomas E. Frye created this Life Tributes page to make it easy to share your memories.

Send flowers to the Frye family.