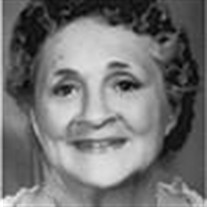 Virginia W. Brown, at the age of 96, graduated to heaven on Thursday, November 21, 2019, from her own home with family members by her side. She has lived in Yuba City since 1961. She was born on March 10, 1923, to Leonard and Eileen "Henry" Smith, in Albuquerque, New Mexico, where she lived through her elementary and high school years. She was the middle child of 5 siblings, George, Tim, Lovella (Tyndall), and Robert. She met her husband of 64 years, Hugh"Bud" T. Brown, while he was stationed in Albuquerque, New Mexico, at Kirkland AFB during WWII. She was known as "Angel" to some and "Mother" to many for her love and kindness. She loved animals, taking in many strays. Virginia became an LVN and worked for Fremont, volunteered for the Yuba City Police Department. She was involved with many ministries. She started Women Aglow and was a member of the Calvary Christian Center both in Yuba City. At 93 she was still driving and delivering Avon. She is survived by her daughter, Darlyne (Stephen); three grandsons, Roy (Kelly), Brian and David (Latisha); five great-grandchildren, Roy, Tyler, Ashlyn, Madison and Gianna; and three great-great-grandchildren. She is preceded in death by her husband, Hugh; son, Larry; four siblings and her parents. Service will be held Tuesday, December 3, 2019, 11:00am at Ullrey Memorial Chapel, with graveside service immediately following at Sutter Cemetery.

The family of Virginia W. Brown created this Life Tributes page to make it easy to share your memories.

Virginia W. Brown, at the age of 96, graduated to heaven on Thursday,...

Send flowers to the Brown family.