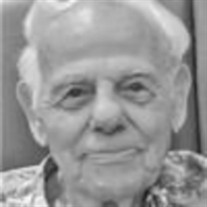 It is with great sadness that the family of Wayne Edward Beutler announce his passing on December 23, 2020. Wayne passed peacefully at home in Yuba City, California at 94 years young. Wayne was born on July 15, 1926 to the late William James Beutler and Meda Eliza Lake in Emmett, Idaho. He was one of eight siblings Helen, George, Juanita, Belva, Francis, Kenny, and Cal. Upon his high school graduation Wayne volunteered and joined the United States Army on January 26, 1945, at the age of 19. He served as a Military Police (MP) in Japan. Wayne was honorably discharged from the US Army as a Sergeant on November 22, 1946. After his time in service Wayne returned to Emmett, ID and married his high school sweetheart Barbara Dell Howard on May 14, 1947. Together they formed a strong loving foundation and a lasting marriage of 67 years. Wayne was preceded in death by his beloved wife Barbara and son Gary. He is survived by his son John, daughter-in-law Susan, son Randy, daughter Debbi, daughter Judy Hill, daughter-in-law Val, and brother Cal. Wayne has thirteen grandchildren, twenty great grandchildren, and six great-great grandchildren. Wayne and Barbara moved their family to Yuba City, California in 1960. Wayne was an outstanding Manufactured Housing salesman. In 1962 Wayne branched out on his own and start the family business, Feather River Homes in Yuba City, CA. Feather River Homes, became an extremely successful Manufactured Homes Sales Business. Wayne and his sons grew the family business exponentially, this growth brought economic prosperity to the community. Through the years they had five Manufactured Sales lots and five Manufactured Housing Development Communities, to include Village Green and Dell Wayne Estates in Yuba City, CA. One of Wayne's favorites past times was bowling. In 1990 Wayne and family designed and built a family friendly bowling center, NU Generations Lanes. Being an avid bowler Wayne could be found bowling with friends and family. Wayne was a committed family man who worked hard to build the Beutler family empire. He encouraged and instilled a good work ethic in his family. Wayne didn't retire he was always on the go. He continued to work and oversee the family businesses and their daily operations, till the end. Wayne was a smart precise business man who loved his family. He was a go getter, a straight shooter and he always called it like it was. Wayne was always working the art of the deal. We shall miss our Dad, "Pops", Grandpa, Brother and Friend. Viewing will be held Thursday, December 31, 2020 at 9:00 a.m. at Ullrey Memorial Chapel, 817 Almond Street, Yuba City. Funeral services will be at 10:00 a.m. Burial will follow immediately at Sutter Cemetery, 7200 Butte Ave. Friends and family are encouraged to join us at the cemetery. Due to the pandemic funeral services will be following Covid-19 restrictions.

It is with great sadness that the family of Wayne Edward Beutler announce his passing on December 23, 2020. Wayne passed peacefully at home in Yuba City, California at 94 years young. Wayne was born on July 15, 1926 to the late William James... View Obituary & Service Information

The family of Wayne Edward Beutler created this Life Tributes page to make it easy to share your memories.

It is with great sadness that the family of Wayne Edward Beutler...

Send flowers to the Beutler family.