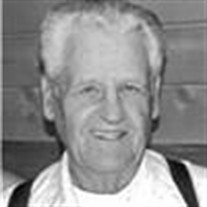 William (Bill) Jennings Bryan Taylor Jr., 88, of Loma Rica, CA, passed away December 20, 2019, at Adventist Rideout Hospital, peacefully surrounded by family. Born October 3, 1931, in Everett, Washington, to William Jennings Bryan Taylor Sr. and Anna Taylor. He was the fifth of nine children the oldest of two sons. He graduated from Marysville High School in 1950, and served in the U.S. Navy from 1950-1954. Bill was a retired sheet metal worker having worked out of several local HVAC shops over the years, including his own Taylor Sheet Metal. Bill is survived by his wife, Ethel; two sisters and one brother; three sons, Bryan (Beverly) of Yuba City, Barry (Dianna) of Browns Valley, Bruce (Diane) of Loma Rica, and one daughter, Karin of Reno, Nevada; two stepsons, Russell Wise of Loma Rica, Donnie Wise (Linda) of Eureka, CA; 16 grandchildren; and 10 great-grandchildren. Bill is preceded in death by his parents; five sisters; a stepdaughter, Darlene Kincade; and a stepdaughter-in-law, Tania Wise. Services will be held Saturday, at 11:00 AM on January 11, 2020, at Loma Rica Community Church, officiated by Pastor Ben Rorie of Faith Lighthouse Church. The family would like to extend a special thanks to the Ben Rorie family and the Staff at Adventist Rideout Hospital for their care and help during this past year.

The family of William ( Bill) Jennings Bryan Taylor Jr. created this Life Tributes page to make it easy to share your memories.

Send flowers to the Taylor family.