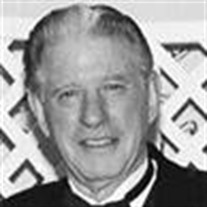 May 19, 1926 - July 18, 2019 Yuba City On Thursday, July 18, 2019, William (Bill) Joseph Yaklich, Sr., son of Mary and John Yaklich, father of five, brother to John Yaklich, grandfather and great-grandfather, passed away at the age of 93. Born in Crested Butte, Colorado, on May 19, 1926. Bill's father worked in the coal mines. The family moved to Marysville in 1936. This is where Bill would serve as class president in high school. He attended Yuba College for one year, worked, and then met Lois (his future wife). He was drafted and served in the US Marine Corps for three years, fighting in the battle of Iwo Jima and stationed overseas in Okinawa. At the end of the war he was stationed in China for four months. He then returned home, continued college, and eventually had five sons with his wife, Lois. Bill spent fifty years in the drycleaning business. Bill was a member of St. Isidore Catholic Church and the Knights of Columbus. He served on the California Grand Jury and the Federal Grand Jury for two years. Bill was very involved in the community. He was a founding member of Sutter Butte's Little League where he coached the Red Sox's for sixteen years. His participation in sports and his commitment to youth sports throughout the area earned his election into the Northern California Sports Hall of Fame. Lois passed away from cancer and Bill eventually married Jeanne Mallet and became a father influence in the lives of her four children. Bill is preceded in death by his parents; wife Lois; and son William Jr. He is survived by his brother John; his four sons, Brian (David), Mark (Tina), Stephen (Josie), and Tim; his wife Jeanne; and children Ken (Tracy), Corie (Jim), Debbie, Jeff (Margie); grandchildren, Jason, Matthew, Christopher, Julia, Jamie and Brian; and six great-grandchildren. Services will be held at St. Isidore Catholic Church in Yuba City on Wednesday July 24th, 2019, at 10am with a reception immediately following. In lieu of flowers, please make any donations in Bill's name to St. Isidore Catholic School.

The family of William (Bill) Joseph Yaklich Sr. created this Life Tributes page to make it easy to share your memories.

Send flowers to the Yaklich family.