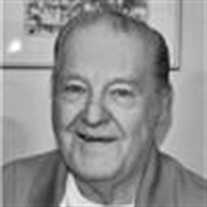 William Homer Reynolds (named for both grandfathers) was born November 7, 1929, in Boise, Idaho. He died peacefully at home on Sunday, September 22, 2019. Bill and Linden Cronin were married May 3, 1953 in Ontario, Oregon. Bill was a Chief Master Sergeant in the U.S. Air Force, serving 28 years in such diverse places as Thule Greenland, for a year beginning three weeks after they were married. He spent six years at Portland International Air Base, in Oregon, working on several different planes, lastly 102's, during which time that plane won William Tell in Florida. 1961-64 at Woodbridge AFB, England. The family came back to Francis E. Warren AFB, in Cheyenne, Wyoming, and a year later was transferred to Beale AFB to work as Flight Chief "A" Flight with SR-71 which was delivered in January, 1966. He went TDY to Okinawa with the airplane in 1968 and 1969 and transferred permanently from 1970-1973 as the Maintenance Superintendent. He returned to Beale AFB in 1973 as the NCOIC of Quality Control, until 1974 when he was assigned as advisor to the Deputy Commander of Maintenance. A career highlight was to be the NCOIC of maintenance for the flight from New York to London and London to LA where the SR-71 set the absolute speed record. Bill also supervised the static display of the aircraft at the Farnborough Air Show. He remained the advisor to the DCM until his retirement in August 1975. And on to the next phase of his life. Fishing! The Sacramento, Yuba, Feather and Klamath, for salmon or trout, and to camping at mountain lakes and near streams, then up to Alaska with his brother many summers-always fishing. And, less we forget, his other hobby, trap shooting at Coon Creek. He traveled around California going to meets representing them, always successful. He is survived by his wife of 66 years, Linden Reynolds; sister, Pauline Shaffer of Colorado; children: Lisa Ballantyne (Ray), Monica Reynolds Koors, William Jr. (Ann), and Wayne Reynolds; six grandchildren: Amy Kelley and Dan Ballantyne, Lauren Koors and Jennifer Meluch, Paul (Andrea) and Gregory (Franzi) Reynolds; eight beautiful great-grandchildren: Zachary, Anna, Josiah, William Van, Emily, Avery, Stevie and new baby Jacob! Bill Reynolds - A life well lived. Funeral service will be held at Ullrey Memorial Chapel, Friday, 11am on September 27th, 2019, followed by burial at Sutter Cemetery and open house at Bill and Ann Reynolds' home in Sutter.

William Homer Reynolds (named for both grandfathers) was born November 7, 1929, in Boise, Idaho. He died peacefully at home on Sunday, September 22, 2019. Bill and Linden Cronin were married May 3, 1953 in Ontario, Oregon. Bill was a Chief Master... View Obituary & Service Information

The family of William Homer Reynolds created this Life Tributes page to make it easy to share your memories.

William Homer Reynolds (named for both grandfathers) was born...

Send flowers to the Reynolds family.