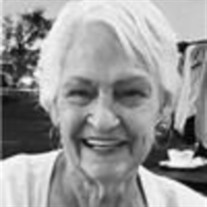 Wilma Pierce, age 84, of Magalia, CA, passed away on March 19, 2022. Born to Marvin and Lois Williamson in Durant, Oklahoma, on December 30, 1937. The family moved west to California when Wilma was a baby. She graduated from Yuba City High School in 1955 and married her high school sweetheart, Walt, the following year. They have been blessed with 65 years of marriage. She and Walt had their first baby in 1960, a beautiful baby girl they named Penny, their family was complete when baby boy Brad arrived two years later. They raised their children in Yuba City until moving to Paradise, and later Magalia in the late 80's. Wilma took pride in being a homemaker, wife, and mother, preparing delicious home cooked meals every evening, right up until the very end. She loved traveling, visiting the ocean, camping, spending time at the family cabin in Butte Meadows, gardening and playing games and cards with her family. She is lovingly remembered by her husband, Walt Pierce; daughter and son-in-law, Penny and Tom Samson; son, Brad Pierce and fiancee, Kris Ormazabal; grandchildren, Dan and Jill Ullrich; Carol Ullrich-Hasch and Tom Hasch, Melodi Samson, Gavin Samson and Cassie Evans; sister and brother-in-law, Clark and Karoly Zaft; great-grandchildren, Emma Ullrich, Brody Ullrich, Claire Ullrich, and Lili Evans; many nieces, nephews, cousins, and honorary family in California and Tennessee, as well as many friends who she considered family. She was preceded in death by her parents, Marvin and Lois Williamson; and her sister and brother-in-law, Alice and Bill Ashworth. Wilma was a follower of Christ, and was a member of the First Baptist Church of Paradise. In her later years, she spent her days reading, thoughtfully planning her weekly dinner menu, completing countless crossword puzzles, jigsaw puzzles, girls' shopping trips with her family, and spending time with her neighbors. She rarely missed a manicure appointment, or a San Francisco Giants game on TV. She was the life of the party, and took joy in spending time with her loved ones, telling stories and reminiscing on her beautiful life. A celebration of life will be held at River Valley Church, 1764 Tierra Buena Rd., Yuba City, CA, on Tuesday, March 29, 2022, at 2:00 PM. Pastor Sam Walker officiating. There will be a family burial at a later date.

Wilma Pierce, age 84, of Magalia, CA, passed away on March 19, 2022. Born to Marvin and Lois Williamson in Durant, Oklahoma, on December 30, 1937. The family moved west to California when Wilma was a baby. She graduated from Yuba City High School... View Obituary & Service Information

The family of Wilma Pierce created this Life Tributes page to make it easy to share your memories.

Send flowers to the Pierce family.